Rock climbing in and around Whitby North Yorkshire

Whitby itself offers little in the way of climbing possibilities. The cliffs are friable sandstone or shale on the whole. Move inland a little though, and there's loads to go at.
Local rock climbing spots of note in order of proximity to Whitby:

The Bride Stones, Dalby Forest National Park
Excellent day out in beautiful surroundings. The rock is a soft sandstone but offers a variety of problems over a range of difficulty levels. Routes vary in height from 1 to 5 metres.

The Esk Valley
All the way up the Esk valley, starting from Egton Bridge, are a number of smallish sandstone outcrops. Some offer some real climbing gems. The climbing improves as you get further up the valley with Peak Scar and the Wainstones offering the most note-worthy routes.

Ravenscar
Some well hidden large boulders offer a number of interesting and quality problems. With an aspect looking NW over the beautiful Robin Hood's Bay, these offer a nice evening's entertainment.

Scugdale
A good 40 mins from Whitby but well worth a trip. Over 200 fantastic problems between 3 and 6 metres high. Mostly VS/HVS with a lot of VD. Many a North East climber's favourite spot.


Many other spots are out there. The best guide is 'Rock climbing in the North Yorkshire Moors', the latest version of which is due out in the shops from late October 2003; in which WebMaster is featured with a first ascent on a route in Farndale! 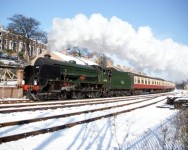 To Make You Smile
Local Police hunting the 'knitting needle nutter', who has stabbed six people in the rear in the last 48 hours, believe the attacker could be following some kind of pattern.
Useful Whitby Links
Your Fortune...
Translator...
Whitby in 1959