The Scoresby family produced two of Whitby's most famous and accomplished Captains. Captain William Scoresby, the senior, (1760-1829) was a renowned and successful whaler whaler and Arctic explorer who's many accomplishments included the invention of the crows nest, designed to protect sailors from the treacherous sea and weather conditions of the North. His son, Rev. William Scoresby (1789-1857) was born into the family when they had already made their fortune from Arctic whaling. As a child William junior made his first sea trip with his farther at the age of 11 and after a few more years of schooling, at the age of 17 he joined his farther on board the whaling ship Resolution, (not to be confused Captain Cook's ship of the same name), as his father's chief officer. On their many Arctic voyages he followed in his father's footsteps and began studying meteorology and the natural history of the polar regions. These experiences fuelled his passion for scientific studies and on his return Scoresby attended natural philosophy and chemistry lectures at Edinburgh University. The papers he wrote of his observations whilst at sea ensured his election as a member of the Wernerian Natural History Society (1808-1858), an elite off-shoot of the Royal Society of Edinburgh.

In 1811 Scoresby married the daughter of a Whitby ship builder and, in the same year at the age of 22, he was given command of the Resolution upon his father's retirement. Each voyage from Whitby saw Scoresby observations advance scientific and geographic knowledge.His many and varied experiments aboard ship resulted in the discovery of warmer temperature differences at depth in the Arctic ocean, advanced understanding of the effects of iron and physical force upon compass reliability and contribution to the existing knowledge of terrestrial magnetism. On his return from his last Arctic voyage to Greenland in 1822 Scoresby's achievements gained him fellowship of the Royal Society of Edinburgh. Crucially his return also saw him met with the news of his wife's death which pushed, an already deeply religious and pious Scoresby to leave exploration behind him and join the church.
After two years of residence in Cambridge, Scoresby took his degree (1825) and became the curate of Bessingby in Yorkshire and later at Liverpool, Exeter and Bradford. Scoresby's clerical duties did not, however, diminish his scientific career and after publication of his Journal of a Voyage to the Northern Whale Fishery, including Researches and Discoveries on the Eastern Coast of Greenland (1823) he was elected as a fellow of the Royal Society the following year and an honorary corresponding member of the Paris Academy of Sciences in 1827. His work found him in touch with many of the eminent scientists of his day including Faraday, Sir Joseph Banks, Joule and Ampere. In addition to his prestigious career as explorer and author of published scientific and religious papers, Scoresby had a keen interest in socio-political issues and was especially concerned with improving conditions for factory workers.

William Scoresby was married three times and died on 21 March 1857 at his home in Torquay. Many of Scoresby's papers, log books and instruments are held at Whitby Museum. 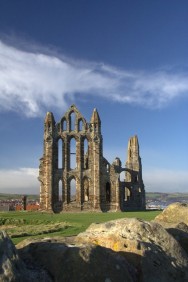 Translator...
Your Fortune...
To Make You Smile
I went to the cemetery yesterday to lay some flowers on a grave. As I was standing there I noticed 4 grave diggers walking about with a coffin, 3 hours later and they're still walking about with it. I thought to myself, they've lost the plot!!
Useful Whitby Links
Touch Whitby