HMS Endeavour has actually been the name of nine different Royal Navy ships. Arguably the most famous of these, however, was the Whitby built ship commanded by Captain James Cook on his voyage of discovery to Australia and New Zealand in 1764. Originally launched as the Earl of Pembroke in 1764, she was built in Whitby by Tomas Fishburn and started her career as a coal carrier. Purchased by the Royal Navy she was relaunched as HMS Bark Endeavour with Cook as Captain in 27 May 1768. There followed a refit, at Deptford on the River Thames, where new cabins were provided for her more prestigious passengers and additional workrooms and storage spaces were built. On 21st July 1768 she was sailed to Plymouth to take on board cannons, provisions and the final complement of crew before officially being re registered as HMS Bark Endeavour. Departing from Plymouth on 26 August 1768 the Endeavour sailed along the west coast of Africa, across the Atlantic and land landed in Rio de Janeiro on 13th November 1768. From here Cook sailed her round Cape Horn arriving in Tahiti the following year on the 10th April 1769. There the transit of Venus was observed on the 8th June and the first part of the Endeavour's mission was completed. In the September of 1769 the Endeavour first reached the shores of New Zealand and became the first European vessel to do so since Abel Tasman in 1642. The Endeavour remaied here for six months whilst Cook mapped the island's coast lines and finally proclaim British sovereignty before sailing onward to became the first European vessel to make landfall, at Botany Bay, on the east coast of Australia. It was during the charting of the coast of Australia that the Endeavour hit a reef, part of the Great Barrier Reef and know known as Endeavour Reef. The sails where taken down but attempts to move her back into open waters failed. Even when 40 to 50 tonnes of equipment and cargo were thrown overboard and high tide came the ship would not be moved and a hole was discovered in her hull. A further attempt at high tide enabled the Endeavour to be moved off the reef whist the crew desperately pumped out the water form the hull to keep her afloat. Resilient and inventive, however, the crew stayed composed and eventually, by sowing together oakum and wool into an old sail which was then drawn under the ship to allow water pressure to force it into the hole in the hull, the Endeavour was able to sail on northwards to safe haven at what is now know as Endeavour River, for vital repairs to be carried out. A month later, with her hull now repaired, the Endeavour set sail on her voyage through the Torres Strait between Australia and New Guinea. Despite their efforts and continued work the ship herself remained in a weary condition and significant repairs were undertaken over the next few months to restore her to sea worthiness before setting sail westwards towards the Indian Ocean on Boxing Day of 1770.

On the Endeavour's return journey it became evident that the crew were also suffering from their time at sea and sickness was rife among those on board. At first Cook attributed the 30 or so deaths, including the ships' surgeon, to drinking unclear water but his orders to add lime juice to combat this had little effect. Finally in March 1771 the Endeavour rounded the Cape of Good Hope and made port at Cape Town where the remaining sick crew were taken ashore for much needed treatment. Just four weeks later and with additional crew members recruited form the local area the Endeavour was able to recommence her voyage home to England and the port of Dover, which she reached on the 17 of July 1771. The epic three year voyage now at an end, Cook continued to rise in rank and fame but the Endeavour herself had a less exalted career ahead of her. Refitted as a stores ship, for four journey's to and from the Falkland Islands, she became increasingly decrepit and made her final commercial journey, to Russia, in 1775 having been renamed as the Lord Sandwich. Now owned by the shipping magnet J. Mather she was deemed unfit to transport soldiers to American to fight in the American Revolution as requested by the Admiralty, later in 1775, but after a refit, was deem seaworthy enough to take a contingent of Hessian mercenaries to Rhode Island, New York the following year. Here she stayed for a time used as a temporary British prison ship.

The Endeavour finally met her end in August 1778 at Narragansett Bay when she was used by British commander Captain John Brisbane as part of a blockade to thwart the advances of a threatening French fleet. This account of her demise however has been a point of debate throughout years. It was claimed, after a letter in 1834 drew attention to the possible presence of the Endeavour on the sea bed at Rhode Island, that she had actually been sold to the French and renamed La Liberte in 1790. There is little to support this though and recent exploration of the sea bed in 2000 by a combined research team from RIMAP and the Australian National Maritime Museum found the remains of a vessel of the same size, design and materials of the Lord Sandwich, the ex-Endeavour at rest in the Bay. The research's photography of relics found at the shipwreck such as a cannon and an anchor provided much media hype and interest but ultimately prove inconclusive. The exact facts surrounding the Endeavours final resting place is likely to remain this way for the foreseeable future as it was announced by the Director of RIMAP in 2006 that the wreck would not be raised.

A full sized replica of the HMS Bark Endeavour was built in Fremantle beginning in 1988 to commemorate the Australian Bicentenary of the European settlement of Australia. She set sail in 1994 to follow in her predecessor's footsteps and eventually returned to her spiritual home of Whitby for the first time in May 1997, to much celebration from an appreciative crowd of locals and enthusiasts alike. 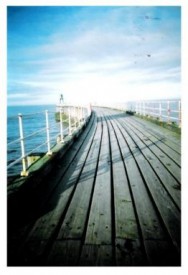 Useful Whitby Links
To Make You Smile
Who has eight guns and terrorises the ocean?... Billy the squid!