Many areas of England have folklore which link the local topography and geography to the movements and whims of mythical creature, such as giants and Whitby and the surrounding countryside is no exception. The legend of the Giant Wade has been used to explain the existence of many of the local hills, standing stones and natural amphitheatres.
Folklore tells us, (contrary to historians who would accredit the Romans) that Wade's Causeway (sometimes referred to as Old Wife's Way), an old road running from Malton to Eskdale was built by the giant Wade for his giantess wife 'Bell' so that she could use it to take her cow onto the moors for milking.

Tales are also told of how in creating this road Wade needed extra earth and soil and so scooped up the ground with his hand thus leaving the mile long bowl-like valley known as the Hole of Horcum.

When Wade had completed this highway he found that he had some excess earth and so he flung it away onto the moors creating either Blakey Topping, Roseberry Topping or Freeborough Hill depending upon the version of the story you are being told. 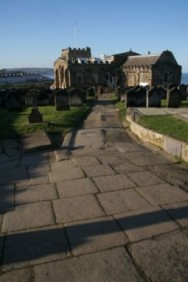 To Make You Smile
The wife was counting all the 5ps and 10ps out on the kitchen table when she suddenly got very angry and started shouting and crying for no reason. I thought to myself, "She's going through the change."
Useful Whitby Links
Advertisement...