Whitby As A Seaside Resort in The Edwardian Period - Whitby Online

Whitby As A Seaside Resort in The Edwardian Period

The following content is taken from the wonderful book A Textile History of Whitby, which you can learn more about here...

Whitby had been a popular seaside destination for many years in the early 20th century; assisted by advertisements in the local paper from the mid 1850s where drapers, dressmakers, milliners and haberdashers tried to sell suitable clothes and accessories for the seaside tourist. However, the Edwardian era gives us more examples of holiday photography in the local area together with a wide range of guide books – often including adverts suited for the visitor. The aim with this historical essay is to share a selection of images from the archives of Whitby Museum, depicting seaside pastimes on the beach and the town’s West Cliff area. 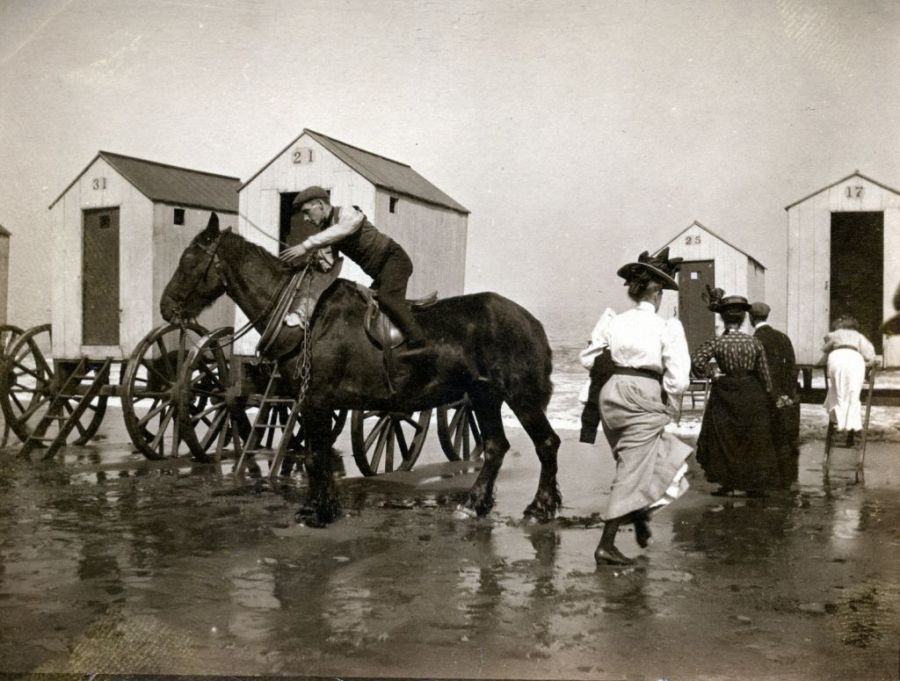 This lovely snapshot depicts clothes in great detail since the women were on their way to and from the bathing machines that made it possible for even Edwardian ladies to cool off respectably in the sea. A bathing costume can even be imagined under the arm of the lady nearest the camera; a white underskirt peeps out from under her raised skirt, as do the black stockings in her comfortable shoes. The image also shows clearly how much work was needed to move the bathing huts backwards and forwards with the help of horses to keep pace with the ebb and flow of the tide. It can also be noted that one of these selected photographs is dated 1905, so the other four are possibly from the same summer judging by the clothes. 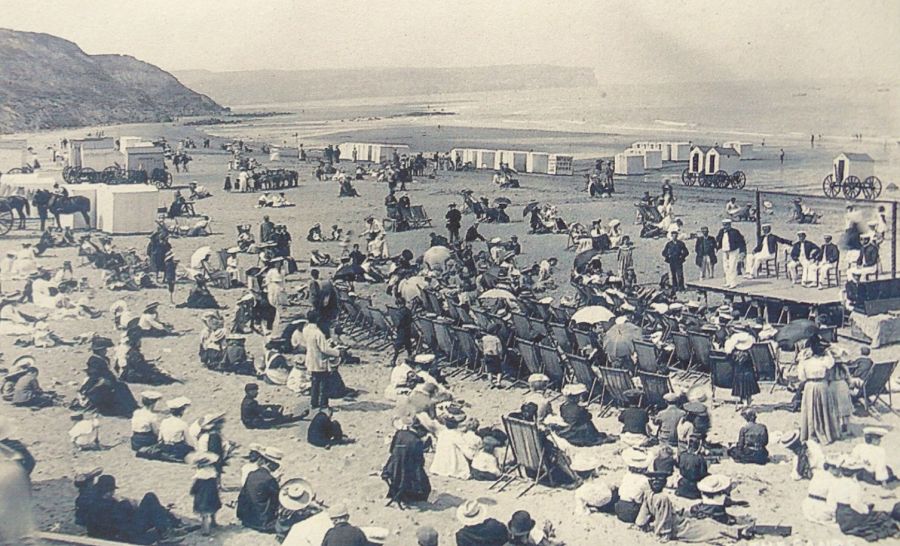 Seaside photography has the advantage that it often allows a more relaxed atmosphere without strict arrangement, so that it conveys a more natural impression to the viewer than contemporary studio portraits. As the number of visiting holiday-makers increased over the years, a need for entertainment of various kinds also developed, as this “concert party photograph” from 1905 shows. A performance of this kind lasted an hour, for which it was possible to hire a deckchair for sixpence or throw oneself down on the sand to enjoy a warm summer day. The many big hats, white blouses, belted waists, simple long skirts and white parasols of the women were typical seaside fashion at the time.

To enjoy a day on the shore as a bystander dressed in a delicate white cotton dress was however mostly possible for the well-off and middle classes, judging by this and other similar photographs. Even if larger groups of the society were in the position to enjoy a summer Sunday at the beach in late Victorian and Edwardian time than in earlier years; those who sewed, sold fabric and clothes and washed these fine garments seldom appeared in these photographs taken on the shore, round the Pavilion or walking in the West Cliff area.

The amateur photography was already introduced in the 1890s with small easily operated hand-held cameras, but professionally produces photographs with the use of large cameras was still very much in demand up to the beginning of the First World War. It was also popular to buy professionally made postcards from the seaside resort, sometimes with coloured details. Guide books were another type of memorabilia, both useful during and after the holiday. Horne’s Guide to Whitby from 1897 additionally includes many examples of advertising by local drapers, where amongst others James N. Clarkson & Son address themselves above all to the modern tourist, offering clothes suitable ‘For Seaside, Travelling, Yachting, Cycling, and Golfing...’

Translator...
Your Fortune...
To Make You Smile
I was at an ATM yesterday when a little old lady asked if I could check her balance, so I pushed her over.
Useful Whitby Links
Advertisement...


Whitby Online - Whitby As A Seaside Resort in The Edwardian Period