The Hundred and Ninety Nine Steps by Michel Faber

Born in 1960 in the Netherlands Michel Faber is a successful journalist and the author of several novels written in English. In 2000 he was short-listed for the Whitbread First Novel Award for his novel Under the Skin. For his second novel, The Hundred and Ninety Nine Steps, published in 2001 and based in Whitby Faber recieved mixed reviews.
The plot follows Sian who seeks refuge from her nightmares on an archaelogical dig in Whitby which sees her climb the town's 199 steps each day to work. Faber entwines a love story with mystery history and archaeolgy all set against the atmospheric background of Whitby. 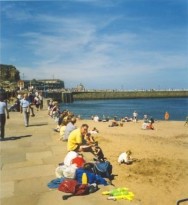 Useful Whitby Links
To Make You Smile
What's the difference between a buffalo and a bison?... You can't wash your hands in a buffalo.