The Whitby Literary and Philosophical Society was founded in 1823 by a group of leading Whitby citizens led by the Rev. George Young.

The Whitby Literary and Philosophical Society was founded in 1823 by a group of leading Whitby citizens led by the Rev. George Young, the author of the classic nineteenth century "History of Whitby" (1819)
and minister at the Presbyterian Church. The chief object of the Society was to setup and maintain a museum, specialising in fossils, since "Whitby is a chief town of a district abounding with petrifications and
containing not a few Antiquities". Ever since Whitby Museum has been run for the people of Whitby by the people of Whitby.

The Museum opened in 2 rooms over a shop in Baxtergate, moving within four years to the top floor of the waterfront building now known as Fusco's Quayside Fish Restaurant. On the ground floor were the
public baths with a subscription library on the first floor. This strategic site on the fashionable promenade of the Victorian resort brought in many famous visitors : Lewis Carroll, George Eliot, Elizabeth Gaskell,
and Wilkie Collins.


THIS MAP IS INTERACTIVE: Click & drag to re-centre. Drag the zoom tool to zoom. Change to satellite views. Drag the orange man to a road for street views.
EDIT THIS PAGE 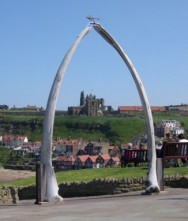