On the famous North Yorkshire Coast and a 10 minute drive from Whitby lies Robin Hoods Bay. The Loft overlooks the Bay from Velux Balcony Windows and is only a 10 minute walk from the cottages of the Lower Bay and the sea. This unique and beautiful Self-Catering Holiday Accommodation offers free on-site parking and free wi-fi access.
The Scarborough to Whitby railway line was opened in 1884. It linked the coastal resorts to the York / Leeds network and many holiday maker's from West Yorkshire took advantage of this new method of transport.

The Victoria Hotel and many of the Bay-top guest houses were built to accommodate the tourists arriving by rail.

As many of you will remember, Dr Beeching had some radical plans for the railway network and in 1963 the Scarborough/Whitby line was one of the many to face closure under his 'rationalisation' plan. The last train to run through Robin Hoods Bay was in 1965.

I was fortunate in being able to buy the property and for the first two seasons a good friend of mine, Martin (Lobby) Robinson rented the premises. His entrepreneurial spirit gave rise to an art gallery during the first season and a cafe/gallery in year two.

After Lobby moved on and got married I used the Waiting Rooms as a weekend retreat. I restored the building and after a few years decided to make use of an area that I had always felt had a lot of potential and so in 1999 the 'Loft' was born.

It was converted by Straws Builders (RHB) and the results are better than I could have hoped for. There is 12' of Rockwool between the ground floor and the loft, therefore sound insulation isn't a problem.

The loft has lots of natural light and there are spectacular views both from the dining area and from the Velux balcony windows in the lounge area. Great care and attention has been taken during all phases of the design and construction work and all planning, building and fire regulations have been met or exceeded.

The result is a feel of quality, spaciousness and tranquility.

THIS MAP IS INTERACTIVE: Click & drag to re-centre. Drag the zoom tool to zoom. Change to satellite views. Drag the orange man to a road for street views.


IS THIS YOUR BUSINESS? 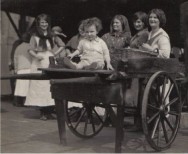 Your Fortune...
Translator...
Useful Whitby Links
To Make You Smile
I intend to live forever - so far so good.
Whitby Movies