The extremely steep and cobbled donkey road parallels the more famous 199 steps in Whitby, leading up to Whitby Abbey and the top of the East Cliff.

Historically, until a decade or so ago, it was down this near 1:1 (50%) track that the beach donkeys walked on their way to perform their arduous beach chores; carrying small children up and down the main Whitby beach. And it was back up it that they went at the end of each day.

The donkeys are probably rather pleased that nowadays, they make the short journey to and from their field on the Abbey Plain by small truck.

We have to date (Nov 2013 at time of writing) reported on a local legend that someone once managed to cycle up the donkey track. We tried this in our younger days (well I did, my friend wouldn't after seeing my attempt) and quite literally rolled backwards, bike and all, into Church Street. It surely is a myth!?!

But no! Last week it was brought to our attention that in fact a few bravesilly people have now cycled up the donkey track! The most recent of which was Wayne Elliott, owner of EDS Bikes in Scarborough.
We interviewed Wayne after seeing photos (below) of his recent successful ascent:

What bike is it? It looks odd. Just a standard frame with oversize tyres/rims or something else?
The bike is a 'Surly Moonlander', designed in Alaska for riding on snow. We import them into the UK for both snow & sand riding; which is why we ended up in Whitby. The bikes also get used for normal mountain bike use too.

How hard was the ascent compared to other hard ascents you've done. If not the hardest, what was, where is it?
The ascent was tough! There is no flat run in so it's almost a standing start. Gearing has to be light so any movement before the steep section is just as hard as you have to really spin the pedals around quickly. The main thing is keeping the front of the bike down and not flipping it over backwards. One of the pictures shows the front wheel off the ground.

How long did it take from bottom to top?
2mins 6sec from the bottom to the abbey roundabout. one of the reasons I want to come back is to do it under 2 mins.

Do you work at EDS or own it or both?
Im the owner of EDSbikes, we are based in Snainton between Scarborough & Pickering, we specialise in Steel, Titanium, Singlespeeds, fixed gear & fatbikes.

How old are you (ish)?
Mid thirties.

Do you do things like this often?
Yes, I know and visit Whitby regularly and just had the idea in my mind. I race the types of bikes we specialise in and also enter endurance events 12 & 24 hour non stop races as well as expedition 4 day races.

What made you decide to come to Whitby to attempt it? Did you come especially?
Jane (my partner) and I just decided to park at Sandsend and ride to Whitby on the beach with the fatbikes & the dog. We headed into Whitby for ice-cream and I said we should have a look at the donkey path, Jane said have a try - so on first attempt I managed it!

Have you ever ridden down the same route?
Yes, I came back down on the bike when I finished it, it really makes you realise how steep it is, you could go over the bars coming down if you pulled the front brake on!

Were the cobbles slippery? Any other particular hazards of note?
It was dry but the there is moss, it would be impossible if wet, even with the tyre I had I was still spinning the wheel every turn. The only other real hazards were people trying to walk up and down, but everyone moved to watch when I was getting ready to have a go.

And you want to come back and do it again!?
I want to head back to try do it in under 2 mins and film it, people think I should do it at night to make the photos different, but as long as its dry I can do it anytime.

Brilliant! Send us a link to the movie and we'll post it on this page. Good luck!

Some pictures from Wayne's ascent 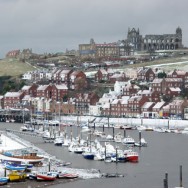 Your Fortune...
Translator...
To Make You Smile
Why was the unemployed doctor angry?... Because he had no patients.
Useful Whitby Links