The 199 steps in Whitby, leading up to Whitby Abbey and the top of the East Cliff.

Whitby's 199 steps are an extraordinary attraction in Whitby. They attract visitors from all over the world - visitors who make the phenomenally tiring trek from bottom to top.

Why? Why would people go out of their way to get to the 199 steps, and then walk up them?

It is of great debate that there are in fact 199 steps in the flight. Some say there's 198, because you shouldn't count the final step to the top, as this is not a step, it is in fact the top. Others say there's 200, because of the step from the bottom onto Church Street. Others say there's other numbers of steps entirely - but these people have simply lost count on the way up... very easy to do as it's hard to count whilst gasping for breath.

2. To see the awesome view.

This is of course ridiculous. At the bottom, you can't see the view. On the way up, you're too busy counting steps and looking down to notice the view. And when you finally get to the top, all you can think about is where the nearest seat and or ice-cream van is - the possible view potential is long forgotten!!

Well, there isn't one actually... but as a local to Whitby I must tell you that I make this pilgrimage regularly, whenever I find myself buying kippers at fortunes, or walking to Tate Hill beach - or the east pier, I pass the bottom of the steps and I can't resist. I have no idea why. They're just magnetic. Come and see for yourself!

Here's a picture to whet your appetite: 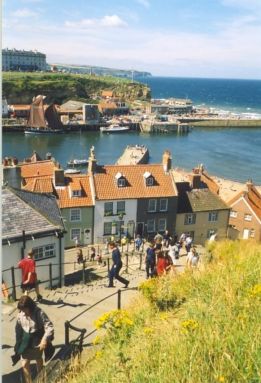 Note that nobody is taking in the view, or in fact appearing to enjoy themselves. Completely pointless - but with a little bit of magic.

Reason 3. Life is about memories when it comes down to it, and a walk up the 199 steps is something you will never ever forget, and it's absolutely free.

There is an unofficial record for the ascent of the steps - currently held (to the best of our knowledge) by a Mr R Parkin who is reported to have made the full ascent in just under 30 seconds!

Another local legend is that someone once managed to cycle up the adjoining donkey track. We tried this in our younger days (well I did, my friend wouldn't after seeing my attempt) and quite literally rolled backwards, bike and all, into Church Street.

If you have any information about cycling up the donkey track without rolling backwards - or ascents of the steps in under 30 seonds - please let us know and we'll post an update on this page. If you can take a photograph of the attempt in progress, all the better!

Reason 4: To follow in the footsteps of Peggy Woollley and Lillian Bellamy who, with a great deal of complaint in the latter's case, ascended the steps on 4 January 2013... (fictionally, and really in The Archers studio in Birmingham with windy sound effects...)

Reason 5 (by Eva Marsh, Lynden Ontario, Canada, April 2015): To meet incoming fishing boats, follow Cook to grill and enjoy fresh catch before climbing back up the steps to have supper.

Useful Whitby Links
To Make You Smile
I've changed my mind... Good, does the new one work any better?