So, where IS Whitby?

Put simply, Whitby is a small seaside town located on the North Yorkshire coast, in the North East of England, between Scarborough and Redcar. But it is also rather more than that.

Whitby is isolated from the surrounding major towns due to the protective influence of the North Yorkshire Moors National Park and the local geography. There are no motorways, dual carriageways, planes or high speed trains connecting Whitby to anywhere else - and it seems very likely that there never will be. Annoying when you want to get to here in a hurry, but such an important part of the unique ambience. A lost world, stuck in time and dripping with history.
To give you a clear idea, here's a map showing the UK and Western Europe and Whitby. Whitby is located at the bottom of the blue anchor symbol as seen here:

View Where Is Whitby? in a larger map

View a local map of Whitby

Find out how to get here by bus, train and car, Whitby travel information
SEARCH WHITBY ONLINE
(WITH GOOGLE CSE)
Advertisement... 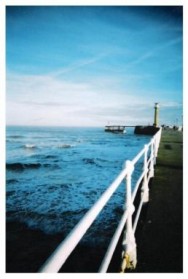 Your Fortune...
Translator...
Useful Whitby Links
To Make You Smile
Why are cooks cruel?... Because they beat eggs, whip cream and batter fish!
Advertisement...


Whitby Online - Where Is Whitby?