Bram Stoker (Abraham Stoker) was born in what is know today as Fairview, Ireland in 1847. He was the third of seven children born to Abraham Stoker and Charlotte Mathilda Blake Thornely. As a child Bram Stoker suffered from a sever bouts of illness that often rendered him debilitated and kept him bed ridden until the age of seven, when he was able to start school. Stoker managed to make so complete a recovery from the illness that by the time he attended Trinity College, Dublin in 1864 to study mathematics he was noted as a competent athlete. Stoker graduated in 1870 with Honours. After leaving University Stoker began his writing career, writing non-fiction books and reviewing theatre productions. After penning a favourable review of [Sir] Henry Irving's (1838-1905) performance as Hamlet at the Theatre Royal in Dublin in 1876 he was invited to dine with the actor and the two became firm friends. In 1878 Stoker married Oscar Wilde's former beau Florence Balcombe (1858-1937) and the couple moved to London where Stoker took up the position of business manager of Irving's Lyceum Theatre; a position he held for the next 27 years and one which ensured him a position of note in London society. This move brought him into influential circles where he met the acquaintance of many acclaimed writers of the day including Sir Arthur Conan Doyle, Oscar Wilde and William Yeats. The couple had their only child, Irving Noel Thornley Stoker on the 31st of December 1879.

Although his work with Henry Irving enabled Stoker to travel the world and gave him rich creative insight on which to base his characters and settings he found the inspiration for a large part of his most famous work Dracula (first published 1897), after a trip to Whitby in 1890. Whilst the Easten European sections of the Gothic novel have been argued to have been based upon tales of blood lust and the living dead regaled to him by the Hungarian adventurer and Orientalist Arminius Vambery, it was the realities of the harsh beauty of Whitby that found it's way into the author's heart and became the setting for so many pivotal scenes within the book. It is believed that Stoker spent his time in Whitby staying at the Royal Hotel situated on the town's West Cliffs. From here the author would have had a prime view down into the town, the harbour and across to the cobbled streets of the older East side, defined by the imposing ruins of Whitby Abbey and the dark silhouette of St. Mary's church which sits brooding atop the winding 199 steps which rise up the cliffs from the streets below. It is easy to see how this vista would have inspired a furtive and creative mind. One needs only to experience this view on a day when the fret clings to the town as it rolls off the sea to appreciate the macabre affect this can have on the imagination.

Whitby is the scene for a good section of the novel with the arrival of Count Dracula to England's shores aboard the Russian ship, the Demeter which runs aground on the shores of Tate Hill beach in the town's harbour during a fierce storm. All of the crew are missing, presumed dead, with the exception of the captain's body which has been lashed to the ship's helm. When the captain's log has been recovered it recounts tales of the strange and unexplainable events which led to the gradual disappearance of the entire crew and of a malevolent presence on board the ship. As the ship runs aground an animal resembling a large wolf or dog is seen leaping ashore from it's deck. The ill-fated ship's only cargo is described as silver sand and boxes of mould or earth from Transylvania.

Bram Stoker died in London, on 20 April 1912. It has been argued by some biographers that he died of tertiary syphilis, a disease some say he may have shared with some of his novel's characters, but whilst this is debatable it is know that the author had suffered a number of strokes. After his cremation his ashes were placed in an urn, to which his son's where added upon his death in 1961, and held in the Golders Green Crematorium in London, England. His wife Florence survived him by twenty-five years.

Although Whitby's Gothic literary connection was established most strongly by Bram Stoker the town has also inspired many other authors- many of which have shared Stockers' supernatural fascination with the town. More often than not these writers are their works are influenced by the Dracula's connection, such as Robert Forrest's début novel based on the Demeter's to ill fated voyage from Bulgaria to Whitby. 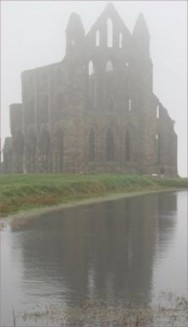 Translator...
Your Fortune...
To Make You Smile
How do you get a baby astronaut to sleep?... You rock-et.
Useful Whitby Links
Advertisement...