A brief description of the beaches in and around Whitby, North Yorkshire

Whitby beaches offer a great variation to the local and visitor. Here's a list of the main beaches, with some information about access, aspect and features.
Starting from the North and working south:

Unless otherwise stated, the following beaches are not known to have a lifeguard

Runswick Bay
East facing bay. Sandy beach. Parking very close to the beach in a Pay & Display carpark at the bottom of a VERY steep bank. Good views of cliffs and the picturesqe village of Runswick Bay. Less busy than the very popular beaches close to Whitby.

Kettleness
Lesser know and somewhat secluded beach, accessed by a climb down from Kettle 'Ness' itself. The Ness is worth a visit to view the remnants of the old alum workings. This beach is an 'adventure' experience, not for the feint hearted and not really recommended to be honest. It's North facing and below the cliffs so gets little sun. There's no sand, just large rocks so it's not very comfortable for shade bathing either.

Sandsend Ness
Park in the pay and display carpark under the stone arches at Sandsend. Access the beach directly from the carpark. Walk along Northwards and there's caves in the cliffs and fossils all over the place. Take extreme care to note the tide because it can cut you off very easily if you go out along the ness and around the corner especially. On top of the ness are some old alum workings and a lunar landscape which is awe inspiring. There's little in the way of protection from the edge of the cliff though, so keep dogs and children (and immature adults) on a tight lead. The shale banks contain 1000's of fossils - mostly belamnites. The tide along the ness tends to rapidly cause you to get washed out directly to sea as it 'rips' along the ness. People being washed out to sea like this is a sad, but annual event. Take great care. Preferably, do not swim anywhere near this end of the beach.

Sandsend beach, Sandsend Village
Park either in the Lythe Bank pay and display carpark, or the other carpark near the public toilets at the Whitby end of the village - or the _other_ carpark close to the entrance to Mulgrave Castle. There's a great beck for kids to play in which often forms (with a little help sometimes) a large freshwater pool which is great for dinghies and dams. The sea here often gets very deep very quickly, and it's still quite close to the ness, so watch for the tidal rip, and preferably don't swim here. The beach is a lovely sand here, and gets incredibly crowded on a hot sunny day - but it can have a really good atmoshphere as a result.

Sandsend beach to Dunsley/Newholm Beck
A long stright road leads from Sandsend to the outflow of Newholm/Dunsley beck. The beach runs the full length of this and there's parking next to the road all the way along. Access to the beach is by a death defying descent of the concrete sea defences, or by the steps. Parking here is free, but hard to come by! The valley where the becks exit is often sheltered from the wind more than other areas, and the beck is fun to play in, so this area can become very crowded. The sea is often very deep very quick and there can be a serious 'shore dump' where heavy waves break right at the water's edge - causing entry to the sea to be adventurous. At other times it can be absolutely fine. The tide causes a strong flow of water along the beach one way or the other - so watch for your children drifting rapidly along the beach to Whitby or Sandsend. This is mostly little more than a bit of fun as the distance from the beach doesn't really vary too much, so its no problem to return to the beach, but depth changes along the beach can lead to kids getting out of their depth. If you're washed all the way to the ness at Sandsend then the situation can become very serious. In summary, swim here with caution.

Upgang Beach
This is the stretch of beach from Dunsley/Newholm beck, all the way up to the sea defences at Happy Valley, which is below the steps leading down from Upgang Lane. This stretch is often used less for sunbathing and picnics than the rest as access is limited. Because of this, watch for the tide because its best to avoid enforced mud cliff climbing races if possible. Watch for dog doo, it's a popular stretch for walking dogs!!

Whitby Beach
Access from town, or down the LOOOONG ramps from the West Cliff carparks... or by the cliff lift if it's running. This is where the beach huts are, and the Spa overloooks. There's a lifeguard on duty during the summer months. This is equally popular as Sandsend main beach and so can get very busy - but as with Sandsend this is not necessarily a negative - there can be a great atmoshphere. Views out to sea and of the piers are great, there's always something going on out there to look at. Swimming here is relatively safe. There's food for sale in the high season, and donkey rides too! 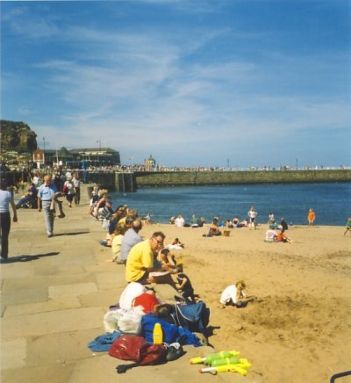 A beach within the harbour itself. Small, but perfectly formed - offering some very safe bathing. Good access from here to the East pier which is perfect for a romantic stroll or a spot of fishing. PS. Don't tell anyone but one of Whitby's best kept secrets is that the best place by far to watch the Whitby Regatta fireworks from is Tate Hill Beach! You can go down there with relatively few crowds, have a little driftwood camp-fire and watch the display. A great night out! Access to Tate Hill beach is from Church Street. There's no parking immediately here, so you will have to make a short walk to get here.

East Cliff Flats
Over the east pier, you find (when the tide is out only!) a LARGE expanse of rock, covered in rock pools, fossils and VAST quantities of muscles and other shell fish. This is an excellent place to explore when you can - it will keep you rock pooling for hours - but don't get too carried away (literally) because the tide comes in very fast. Stay close to the access point at the pier unless you know exactly what the tide is doing. Here's a picture of this part of the coast: 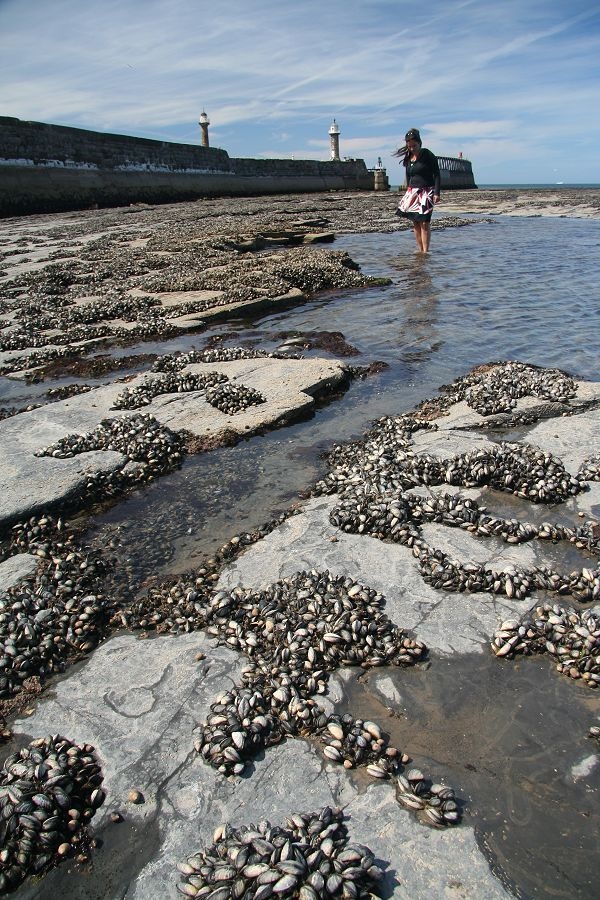 Saltwick Bay Beach
Saltwick bay is accessed from the Haven Holiday Park above the bay. It's a little bit of a drive from Whitby. Alternatively you can park at Whitby Abbey and take a stroll along the cliff path with panoramic views out across the North Sea. Drop down to the beach at Saltwick via a steep path and arrive in this secluded little bay. There's a magical feel to Saltwick - with the strange rock outcrops and sheltered feel - it's definitely worth a visit. 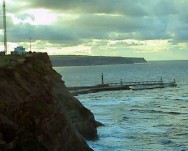 To Make You Smile
What did the health attendant say to his assistant?... Hi Jean.
Useful Whitby Links
Translator...
Your Fortune...
Advertisement...