Kitesurfing, Kiteboarding and kite landboarding in and around Whitby

Possible power kite flying venues in and around Whitby:
I'm new to this sport and have only limited flying experience in the Whitby area but have found that you can get consistent winds off the sea when it's blowing onshore which can be excellent.

The sand between Whitby and Sandsend is too soft for kite powered landboarding, but the beach is huge and so excellent for scudding.

Best place I found for power kite landboarding was the Caedmon School playing fields. You can park for free at the front of the school. Watch out for goal posts. Probably only accessible at out of school hours.

Here's a link to a kite flying website: Flexifoil

I'd say the Kitesurfing (kiteboarding) would be possible between Whitby and Sandsend, but it's probably only really safe to do so when the tide is a long way out due to the rapid rise in the terrain as it leaves the beach (which can lead to lofting). Also watch out for the infamous rip which runs along the beach! If you get too close to Sandsend ness when it's running in the wrong direction, you can easily get swept out beyond the ness (I know!). 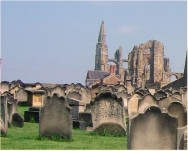 To Make You Smile
Tea is for mugs!
Useful Whitby Links
Advertisement...