Unbeknown to many, it's not always the far flung corners of the world where you'll find stunning gemstones. Here in Britain, there's a beautiful, intense gemstone that's been a head-turner for centuries, known as Whitby Jet. It's found off the majestic shores of Whitby - Yorkshire's archetypal fishing town - where W Hamond - the Original Whitby Jet Shop - has been transforming it into desirable jewellery for 150 years.
In addition to a wonderful selection of Whitby Jet Jewellery, W Hamond in Whitby is also home to first floor Tea Rooms. (Open Monday to Sunday 9:30pm - 5pm) 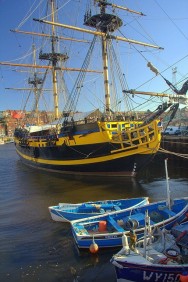 Useful Whitby Links
To Make You Smile
If I agreed with you, we'd both be wrong!
Advertisement...